Google Chrome and several anti-virus companies, have began blocking uTorrent, and are classifying the program as malicious or potentially dangerous.

A host of reports suggest uTorrent is linked to riskware and trojans, which is what has caused the companies to flag the popular BitTorrent client.

The VirusTotal scan results below, show that at least six anti-virus applications, including ESET and Symantec, have flagged the software.

We at EverydayElectronics have learned, there is no indication or evidence to suggest the uTorrent client itself is harmful. It is currently being flagged because the uTorrent.exe file comes with a Trojan.Win32.Generic!BT file, and the controversial OpenCandy bundling software.

uTorrent is also being blocked by Google in a number of ways. When attempting to download the latest release of the torrent client, Google Chrome periodically flags the software as malicious, and blocks the download. 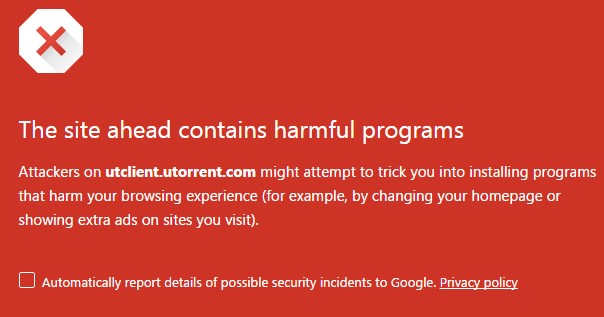 Google is also actively blocking multiple pages that link to uTorrent and other BitTorrent Inc. software.
According to the tech giant, parts of the uTorrent website contain “harmful programs.”

Many uTorrent threat reports seem to be triggered by the bundled third-party software. Will this keep you from using uTorrent?

More on the story coming soon ..

* Help us spread the word by liking, sharing, retweeting or commenting. Each and every click counts. :-D